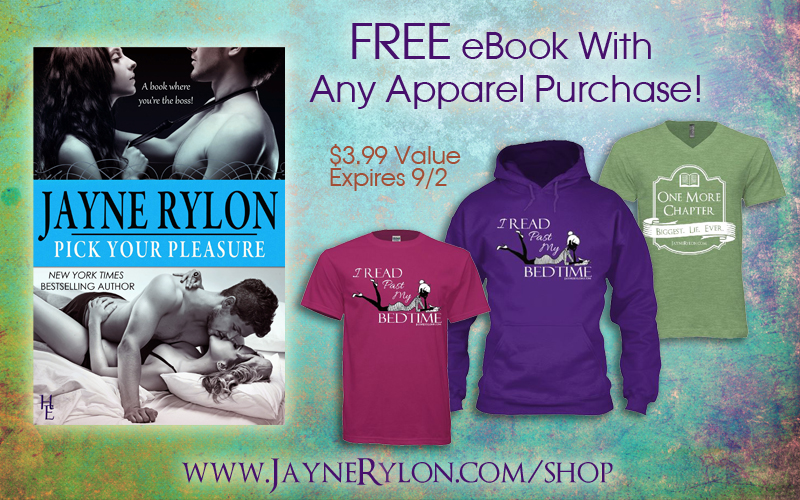 Labor Day Sale! I just learned that I can make coupons on my online store, woot! So for the entire holiday weekend, I’m giving away a free ebook with any apparel purchase. Here’s how to claim your free book in three easy steps:

1. Go to www.jaynerylon.com/shop
2. Put both the ebook version of Pick Your Pleasure and the apparel in your cart.
3. Enter the coupon code for the appropriate file type you’ve selected to read your ebook in.

Voila! The site will deduct the cost of the ebook ($3.99) and you’ll get an email with a download link as soon as checkout for the rest of your order is complete.

Happy reading and have a great holiday weekend. 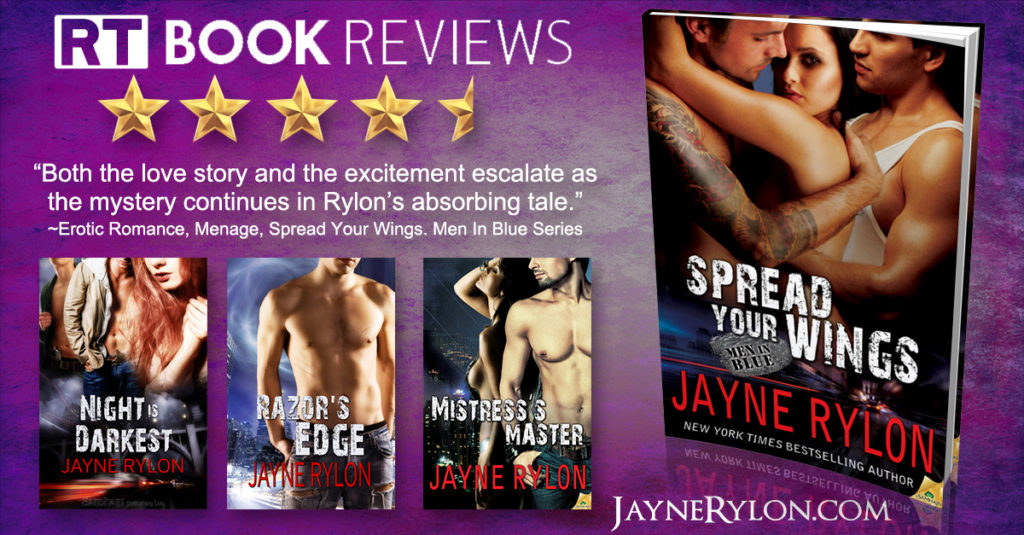 Holy crapoly! I was eating my dinner last night and flipping through RT Book Reviews when I saw Spread Your Wings got a fabulous 4 1/2 star review! I almost choked. Here’s what they had to say: “All the Men in Blue and their significant others are here to fight an unknown enemy in the fourth installment of the series. Both the love story and the excitement escalate as the mystery continues in Rylon’s absorbing tale. Enough information is given about the supporting characters to sustain this book as a fabulous stand-alone read.”

If you haven’t already checked out this romantic suspense series that centers around a unit of sexy cops, now’s the perfect time

Lacey Daughtry gets tragic news of her brother’s murder in the line of duty. Plagued by mysterious phone calls, she turns to her brother’s best friends and fellow officers for protection…and comfort. Determined to suppress the most extreme facets of their lust, the partners agree to settle for sharing the woman they crave while concealing their desire for each other. Their blossoming relationship is complicated by secrets. And the only way to evade the killer threatening their lives is to bare their souls in the darkest hours of the night.

Razor spent months rehabbing after getting shot. When he’s assigned an undercover operation–as a hometown hero in a TV dance competition–he’d determined to resist the allure of his sexy partner. For Isabella, staying in the limelight is one way to keep from ending up dead. But is she running from her ex or making it look that way to save her pretty ass? Razor’s career depends on him being able to discover the truth.

Determined to protect her charges from a potent designer drug, Mistress Lily plays a dangerous game, cozying up to Sex Offender’s creator while smuggling its victims to safety. Undercover cop Jeremy Radisson must team with her. When they clash in a desperate game of who’s-on-top to prove their loyalty, one of them must make the ultimate sacrifice…and the other will use every trick in the book to keep them safe without blowing their cover.

After nearly ten years pining over a man with whom she spent a single night, two sexy cops turned Jambrea’s head and ignited her passion. But when Matt and Clint wouldn’t admit to the bisexual attraction binding them, she moved on without them. She never expected her friends to turn her wild party into a bait and switch…or that a ghost from their pasts could propel them all into danger.

Lucas and Ellie have been through hell. Ellie bears emotional scars while Lucas’s freshest wounds have ended his military career and resulted in the loss of his leg. When old enemies resurface, Ellie is threatened. Lucas drags himself into the land of the living to protect her. On the run, both have to fight through their pain. Will they learn to cope, relying on each other to survive and have fun again, even if it means admitting weakness to the person they most wish they could be whole for?