I’m so thrilled to share that I was nominated for four Bookies (awards given at Authors After Dark﻿ 2014 in Charlotte).  Voting for the final winners will begin soon.  The categories I’m nominated in are:

Congratulations to all the other authors!  I see lots of favorites on the list.  And most of all, thank you to everyone who nominated me.

PS. We’re now just 3 shirts away from guaranteeing the Powertools Limited-Edition T-shirt print run.  Get in on the action here if you haven’t already.

While at a reader conference last weekend I got several requests for book related T-shirts.  Sounds cool to me!  So I’m trying something new.  I launched a campaign with a goal of 50 shirts here after asking readers to vote on three designs on Facebook.  The winning design is available in purple basic tee or black basic tee for $16 or black v-neck (purple wasn’t available) for $20.  The way this works is that the campaign stays open for 21 days, until 10/17.  If we get 50 pre-orders before then the shirt will be charged to your cards or paypal on that day and printed.  Otherwise, there’s no risk to you and no charges if the campaign doesn’t meet its minimum.  This was the best way to keep the cost low for everyone and not end up with a bazillion extra T-shirts in my office 🙂

I hope you like it!  If this is successful I’ll try one of the naughtier Powertools designs or a design based on another series if there’s sufficient fan demand.  You ask, I listen!

Thanks so much for reading and supporting my books.  It means a lot to me that you’d want to wear something related to the stories.  Don’t forget, the more we share the news about the T-shirts, the more likely they are to actually go to print.  I appreciate your help in spreading the word!

I have a random assortment of news to share today.

First, thank you for all the awesome feedback on Pick Your Pleasure 2 (Henry’s story).  I’m so glad you enjoyed it!  The book is now available in print as well as ebook (Amazon, B&N, KOBO, ARe, and Smashwords).

Next, nominations are being accepted now for the 2014 Bookie Awards which will be presented at Authors After Dark in Charlotte next August!  Only books published during certain dates by authors attending AAD next year are eligible.  For me those books are:

If you loved one of them (plus there are general awards like favorite author), awesome.  If not, go vote for something you did love 🙂  Only authors attending the event are eligible to win bookies.  Voting closes shortly so don’t delay or your favorite could be left out! 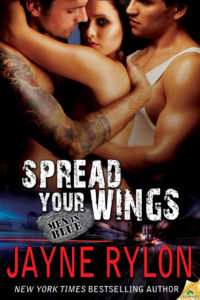 Last but not least, I mailed the latest edition of the Naughty News yesterday.  It should have hit your inbox (or spam folder!) last night.  There were 11 winners drawn from the list of subscribers for prize packs but so far only five of those have been claimed so make sure you check your copy to see if you were one of our lucky bitches!  Also, there is an exclusive sneak peek of Spread Your Wings which will release next month.  Men in Blue 4 will be out on 10/15 and is Jambrea, Matt and Clint’s story.  If you aren’t signed up for my newsletter yet, come on over and join to make sure you don’t lose your chance to be one of next month’s winners.

Now back to edits on Super Nova!  Happy reading,

Out Today! Pick Your Pleasure 2

I’m thrilled to say the sequel to my interactive romance, Pick Your Pleasure is available today!

Ever read a book and wish the heroine hadn’t done that or gone there or slept with that guy? Well, now you’re in charge. The reader decides what happens here.

Henry Emerson has spent a decade hiding his identity. In the light of day he’s a protector, head of security for a close friend. At night, he’s the owner of an elite sex club, Underground.

But when he meets Brooklyn, who bridges both existences—socialite and subterranean wildcat—he begins to wonder if it’s possible to find everything he needs in one woman.

Where will they forge their bond? In the light of day or the dark of night? It’s up to you. 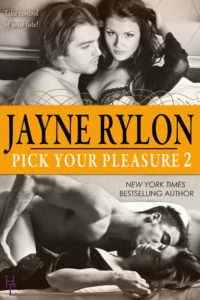 “Well, then. Since you’re no longer my employee, I can do what I’ve been wanting to for a while. Ask you out. Would you rather our first encounter be on familiar ground? Or do you want me to take you away from here right now, somewhere private?” Henry’s question flowed over
her like smooth whiskey, intoxicating and poisonous if overindulged in.

“What an ego you have!” Brooklyn sneered.

“More like instinct. Don’t kiss me back and I’ll let you go,” he whispered to her as he settled his lips over hers and infused the taste of spice and man into her evening.

Resolute, she kept her mouth firm, unyielding as her spine, which stayed ramrod straight in his grasp. Warm fingers stroked the taut muscles of her back as he continued to persuade her to
open for his tongue. The talented muscle prodded the seam of her grimace.

She was hanging tough until she allowed her eyes to drift open. The up-close-and-personal glimpse of the intensity in Henry’s gaze did her in.

Startled, she let out a tiny gasp—enough opportunity for him to weasel his way inside and deepen their kiss. The soft pulls of his mouth as he sucked on her lower lip resonated through her
core.

Moisture gathered between her legs, washing away her resistance.
When Henry groaned into her mouth, she realized she had begun to return his advance,meeting him lick for lick with her tongue. Leaning into his secure embrace, she didn’t worry once that he’d let her fall when she dedicated herself to stealing a single taste of the forbidden.

And damn was it worth it. More decadent than a triple-layer chocolate cake.

The rake of his teeth had her slanting her mouth over his to fuse them more tightly, though such a thing would have been impossible given how he’d wrapped her in his arms as if they were a boa constrictor. She didn’t complain about being tucked to his toned body.

Not until he shattered her euphoria and brought her crashing back to reality by separating them enough to give her a glimpse of his shit-eating grin.

“Come on, Brooklyn. Don’t deny you feel this chemistry too. I can see your hard nipples through your uniform.” Henry singed her with a stare at her chest.

Not lewd or degrading, more matter-of-fact, yet lascivious all the same.

She swallowed hard. If she was going to sacrifice her job—the only thing she loved to do, and excelled at in the world—she might as well make it worth it. Then she’d have the satisfaction of walking away from him and his club at the end of the night.

Or maybe the weekend.

Something told her they’d need at least that long to work this adrenaline-fueled attraction out of their systems.

Worrying about the rest could come later.

“What will it be?” Henry purred against her neck. “Where do you want me to take you?”

Saying no wasn’t an option. Because if nothing else, she was honest with herself. This man was exactly what she’d been craving for two long years. He was the reason she’d denied herself a personal lover outside the realm of her duties.

“Come on, Brooklyn.” He didn’t give her a chance to spook and change her mind. His thigh pressed between hers and she shivered. “Where will I make you mine?”