Summer Boxsets – One Month Only 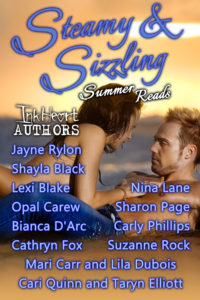 There’s a hot summer reads box set releasing on July 1, but they are available for preorder now! Through My Window, the first book in my Red Light series will be included in the Steamy Collection. There is also a sister set called Sexy and Sweet. This box set is a great way to check out 21 different, previously released stories for less that $6 bucks! So if you’ve been thinking about taking a look at Red Light, now is a great time to grab it (along with 20 other books!).

These great stories are here just in time for your summer reading pleasure. But…they are only going to be together for a limited time, so make sure to download both boxed sets (only $2.99 each) today!

Wicked All The Way by Shayla Black
When a gruff military man with a desire to control seduces a skittish divorcee bent on finding her independence, will she give in to more than their sizzling chemistry?

The Dom Who Loved Me by Lexi Blake
Sent to steal her secrets, he soon craved her submission.

The Male Stripper by Opal Carew
Her ultimate sexual fantasy brought to life….not one, but two sexy male strippers for one night of torrid passion she’ll never forget.

Elemental Pleasure by Mari Carr and Lila Dubois
There is passion and power in three.

Grif by Bianca D’Arc
Grif is far from home when he meets a sexy, magical woman in desperate need of his help.

Web of Desire by Cathryn Fox
When the captive suddenly becomes the captor, Ally finds herself tangled in a web of desire—of her own making.

Allure by Nina Lane
In Book Two of the sexy Spiral of Bliss trilogy, Liv and Dean West’s passionate romance is put to the test as they struggle with an unexpected family crisis.

Dare to Love by Carly Phillips
When a man who requires dominance falls for a woman who needs independence, can they survive the fallout?

The Great Escape by Suzanne Rock
Gianni loves dominating Sienna during her sessions at the Ecstasy Spa, but when his ex-lover returns and wants in on the action, all three of them uncover a bond that forces them change their views about love.

Through My Window by Jayne Rylon
What happens when a sex worker fall in love with a client but doesn’t plan to quit her job?

Rocked by Cari Quinn and Taryn Elliott
Love definitely wasn’t on the setlist. 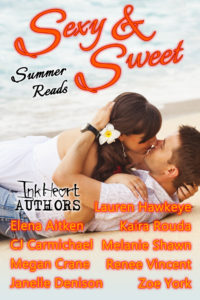 Falling Into Forever by Elena Aitken
Secrets cause Kari to run, Rhys is determined to catch her, can she find the courage to trust again?

A Daughter’s Place by CJ Carmichael
For the sake of her child, a single mother must face the father who disowned her, the ex-boyfriend who hurt her and the neighbor she’s always loved in…

Tempt Me Cowboy by Megan Crane
Chelsea Collier is a good girl schoolteacher who’s never done a bad thing in her life, but bad boy newcomer Jasper Flint is definitely a bad thing worth doing…

His for the Weekend by Janelle Denison
After nine years apart, one forbidden kiss between past lovers leads to one hot weekend, but when their time together is over, will Rachel walk away from Luke again, or can he convince her to stay and be his forever?

Unspoken by Lauren Hawkeye
Once, Ellie Kendrick was the only thing that Dominic Gabriel wanted… now she’s back and her version of what happened between them so long ago makes him question everything he knows about himself as a man…

Weekend with the Tycoon by Kaira Rouda
When wealthy tycoon Blake Putnam invites employee Samantha Jones to a family wedding on Indigo island with no strings attached he knows it’s risky business, but neither of them expects what happens next.

The Start of Something Good by Renee Vincent writing as Gracie Lee Rose
Who knew Mr. Right lived right next door?

Where Their Hearts Collide by Zoe York
When the girl next door meets the man of her dreams…at exactly the wrong time. 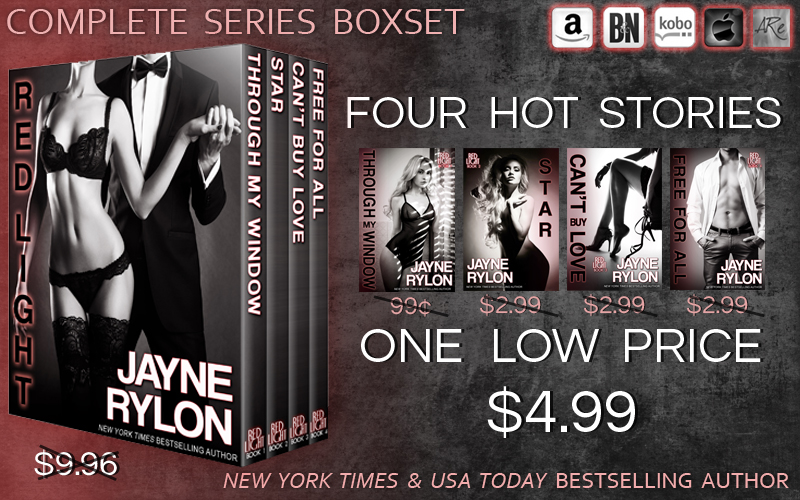 Out today from Jayne Rylon, a bargain bundle of the complete Red Light trilogy for only $4.99. 70% off the originally published prices, greater than 50% off buying individual titles.

What happens when a prostitute falls in love with her client, but doesn’t plan to quit her job?

I’m Star, a sex worker in Amsterdam’s Red Light district. I invite you to step through my window. Careful, though. Observing my passionate exchanges may destroy your preconceptions.

I adore my profession. I’m many things in the course of one evening—whore, lover, nurse, psychologist and friend. But above all, I’m still a woman. Maybe the truths I’ve discovered about myself by serving others will help me deal with one customer who’s come to mean more than all the others.

There’s no doubt Rick desires me, but lately our business arrangement seems personal. How can I choose between the profession I love most, and the person I can’t live without?

I’m greedy. I want both.