I know some of you have been waiting for a while now for Men in Blue 4, Spread Your Wings, which is Jambrea, Matt and Clint’s story.  I’m happy to say I’m well underway on the book, which comes out on October 15th.  The cover was just finalized today and I think the blurb is either final or very close so… here’s a sneak peek 🙂

In the meantime, Mustang Sally will be out in 25 more days (6/4) and Hope Springs, Compass Girls 2, will be out on 8/20 to keep you busy reading until October. 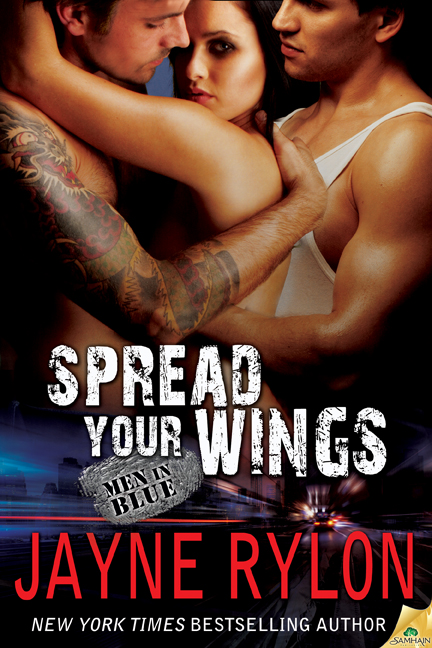 She’s through playing it safe…

Jambrea was patient long enough. After nearly ten years pining over a man with whom she’d spent a single night, her job set her on a collision course with two sexy cops who turned her head…and ignited her passion.

When it became clear that Matt and Clint would never admit to the bisexual attraction making an equilateral relationship possible, she couldn’t choose a favorite. So she had to turn away and move her life forward—without them. Jambrea approaches Mistress Lily and Master Jeremy to arrange a wild night at their sex club—never expecting her friends would pull a bait and switch.

Just when happily ever after dangles within reach, it becomes clear someone has Jambrea in their crosshairs. Is it one of her lovers’ old cases coming back to haunt them, or a ghost from her military past? One thing’s for certain. Now that they’ve made the leap, they’d better learn to soar…or they’ll all crash together.