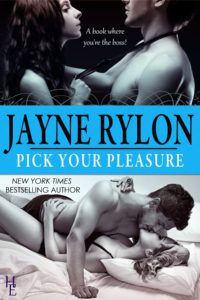 Check out this neat article on Pick Your Pleasure and the style book by Romance Novel News. It contains fair criticisms of the format. I am planning a sequel for Henry’s story, so I’ll have to see what I can brainstorm but I’m curious… for those of you who have tried it (or not) what did you like or what kept you from being interested?  Anyone else have suggestions for improvement?  I’m always open to them!

If you missed it, here’s a little more about the book.

IN PRINT
You can get it either from Amazon here or directly from Createspace here.

Coming soon from Barnes & Noble and other retailers

Ever read a book and wish the heroine hadn’t done that, gone there, or slept with that guy?  Well, now you’re in charge.  The reader decides what happens here.

Linley Lane, CEO of Lane Technologies, has had enough of blah dates.  When she decides to shake things up with a visit to an underground sex club she’s heard rumors about, she realizes she’s way out of her league.  This is no usual hookup spot.

Presented with two potential guides for the night—men who turn her on more in a matter of minutes than a year of lame dating in her high-class circles did—she’s got some tough decisions to make about how she wants to spend the rest of her evening and just how dirty she intends to get.

Will she choose to be romanced by a sexy gentleman?  Or will she indulge the rare anonymity Underground affords to revel in wild excess with a likeminded rebel?  And where will they go from there?

Everything is up to you.

“Pick Your Pleasure by Jayne Rylon is a fun treat!!! You control the story that you are reading and have fun doing it.  I love that a group of women could be all reading the same book with totally different stories! I plan to go back and follow the other story paths. Hope you enjoy this one as much as I have!!! Happy choosing!!!” – 4.5 Stars & True Gem from KC Lu at Guilty Pleasures Book Reviews

“Ms. Rylon has tapped into a sadly unused side of my personality and it is done with absolute awesomeness! I can indulge my playful and curious side, all while being titillated and aroused. It’s really the best of both worlds all wrapped up in one deliciously adult package. I swear that woman is a genius! And it’s all offset by the sexy kind of writing that Ms. Rylon does so well. There is a reason I devour every single one of her books I can get my hands on. That’s because she tells interesting stories with smoking hot love scenes that are incendiary enough to make even a nun spontaneously combust.” 5 Stars from Ursula at Love Books!

“You’ll require a guide for your adventure tonight.” her greeter said as if he could sense the uncertainty swirling around her brain. “New members are always paired with a veteran on their first go around to ensure their enjoyment.”

“I thought that was your job?”  She tipped her head as she examined his expression.

“I wish I were so lucky.”  He gave her a tiny bow.  “Chase and Ryder have both offered their company this evening.  We’ll leave the choice to you.  Play nice, boys.”

The greeter winked at her before retreating, perhaps to collect another very willing guest from the garage.

“So long as I don’t have to fight fair.” The bump on scruffy guy’s nose attested to his experience with brawling.  She felt bad for prince charming across the table if things came to blows.

“Wouldn’t expect you to, Ryder.”  The burnished blond shook his head though he smiled as he said it.

Dashing, dangerous, and devilish, Ryder scooted closer and laid his palm high on her thigh.  Entirely too close to the hem of her dress for someone she hadn’t even officially been introduced to yet.

Denying the electricity his skin conducted would have been pure insanity.  Hot and firm, his touch did things to her she’d never imagined possible with a single contact.  He didn’t wait for her approval or shrink from her—Linley Lane, CEO.

Was it like this for other women?  Or was this man something special?

A tiny connection and he did more for her than the parade of perfect men who’d come before him.  She blew out a sigh that ruffled her bangs, washing her cheeks with a cool breeze.

“Hands off my lady, please.”  Chase didn’t seem disturbed by the zero-to-a-million-and-sixty approach Ryder adopted with her.  His quiet confidence made her do a double take at his model good looks.  Hell, he had most of Hollywood beat in her book.

Piercing blue eyes met her curious stare.  He didn’t flinch from her inspection.  Patient yet persistent, he waited for her to look her fill.  With thick lashes and a couple of laugh lines that hinted at a good nature, she hoped she wasn’t drooling.

What were the odds?  Two men.  Both of whom she had compelling—if completely opposite—chemistry with.

“Would you care for a drink?”  Chase’s smooth baritone made her blink twice before she deciphered his offer.

“Yes, please.”  She studied his expert handling of the bottle, impressed with how he poured the crisp liquid without spilling a single bubbly drop.  When she reached for the stemware he proffered, he surprised her by clasping her fingers in a gentle yet sure hold then dusting the back of her hand with his lips.

Before she could dig in, he slipped the glass into her hand and wrapped her fingers around the delicate crystal.

“What century are you from?” Ryder growled as he ignored his rival to focus on her.  “Either way, you’ll be ancient before you get to the good shit with him.”

The rebel’s fingers hadn’t moved from her leg.  Well, maybe they had.  Higher.

Instead of creeping her out, his deft massage encouraged Linley to sink into the tufted velvet, allowing her thighs to relax and part.  Just a bit.

“You didn’t come here tonight to be bored, did you?”  Ryder reached across her to cup her cheek in his broad, slightly callused hand while the other continued to mesmerize her with his intuitive knowledge of her erogenous zones.  Nudging her chin up, he forced her to meet his gaze.  His fingers curled around her nape, and he leaned forward until his lips nearly collided with hers.  “Pick me.  I’ll make sure you never forget the night you decided to be a bad girl.”

When she nearly succumbed to the promise of his slightly rough cheek to steal a kiss, he retreated, though his skilled fingers continued their insidious assault.

“I hardly call romance dull.”  Chase sipped from his glass, reminding her of the treat fizzing away before her.

Linley downed a swallow or two.  Moisture gathered at the corner of her mouth.  Before she could reach for her napkin, Chase swiped a droplet from her lips with his thumb then sampled the mingled flavor of the alcohol and her skin.

She wished he would.  Instead he withheld the pleasure, making her yearn for more.

A glint from Ryder’s direction had her glancing away in time to see him chug his drink then pour another round.  The powerful flex of his throat—primal and strong—inspired her.  In her mind, she could picture nibbling the cords there as he rode her.  With him, she wouldn’t have to beg for what she wanted.

He wouldn’t make her take.

So many times, she had to be the aggressor.  In meetings.  In dating.  Handing over the reins would be a welcome relief.  This man would afford her that luxury.

When he was down to the last sip of the second round, he held it in his mouth and set his glass on the table with a clunk.  This time he didn’t stop when he swooped in.  His lips landed on hers without apology.

Ryder proved that though he might lack stealth, he had finesse in abundance.  His mouth turned hers pliant as he shared the rich drink and a taste of what a night with him would be like.  He sucked on her tongue, using the slightest edge of his teeth to awaken nerves gone drowsy with an intoxicating blend of allures.

When he withdrew, he bit her lip lightly, letting the subtle sting remind her of the things he’d done to her body without effort.  Her nipples rubbed against the padding of her bra.  She attempted to cross her legs to appease the part of her that screamed for pressure right where she needed it most.

To her surprise, it was Chase who prevented her from trapping Ryder’s palm between her thighs.  “No, love.  Don’t hide.  You didn’t come here tonight for that.”

“And what if I’ve changed my mind?”  Having two men bracketing her, promising her their own brand of sexy fun, overwhelmed her.  For a moment, she wondered if she could handle it.  Or would she disappoint them?  It wasn’t like she had a ton of experience.

“Then let me take you home.”  Chase’s solution seemed genuine.  “That’s not code for anything, by the way.  I’ll drop you at your door, safe and sound, if you’d prefer.”

“No one’s forcing her.”  Ryder seemed offended.  “But I won’t let you lie to yourself, wildcat.  You came hunting for this.  You’re soaked.  My finger isn’t sliding around on its own down there.  I’ll make it easy for you, give you things you never dreamed you needed.”

Linley’s head thunked against the seat as she dropped it backward.  “Too bad I can’t have you both.”

Ryder laughed.  The easy, boisterous sound made it clear he did it often.  With gusto.  “In my world, that’s an option.  Here we’re Underground.  The next level below us is called Downstairs.  I hang out a bit deeper.  The Basement of the club offers the possibility of ménage, among other more daring pursuits.  Chase doesn’t sink that low, though.”

She peeked up in time to catch the other man’s tiny frown.

“That’s true,” Chase confirmed.  “I prefer to stick to Downstairs.  And I fly solo.  I assure you, you won’t need other men when you have my full attention.  For dipping your toe in, I recommend the first level of the club.  Perfect for wading.”

“Screw that.  Jump into the deep end.”  Ryder lifted his palm from her saturated thigh, licked his finger, and then held out his hand.  “I won’t let you drown.”

“Neither will I.”  Chase extended one of his as well.

“So, who will it be, Linley?”  She didn’t have time to wonder how they knew her name.

Instead she searched inside and uttered her preference for tonight.