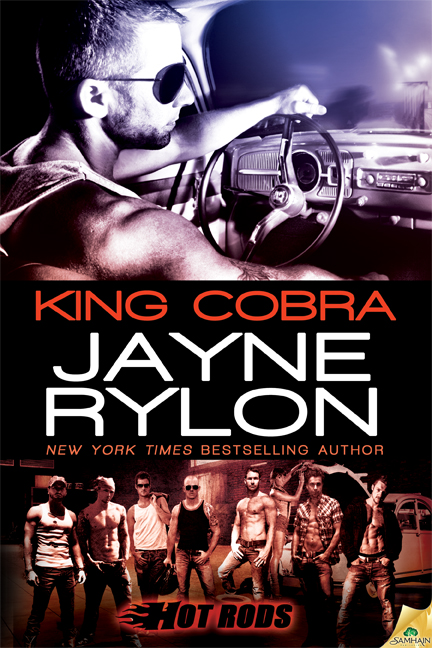 I’ve been waiting a while for this moment… I’d like you to meet some people.  Okay, so they’re characters in an upcoming series I’m doing with Samhain Publishing.  You met two of them in Powertools, Hammer it Home.  Eli London, Hot Rods garage owner, is King Cobra.  And book one is the story of how he and Alanso Diaz learn from Eli’s sexpert cousin in the crew how to take their relationship to the next level before going after the woman they’ve wanted forever:  Mustang Sally.  I can’t tell you how awesome the experience in writing these books has been so far and so it’s a crowing moment to have this cover art to show you.

See, when I start a new project like this (which will encompass at least six books–3 scheduled to be released in 2013 and 3 scheduled to be released in 2014) I create a series bible to keep everyone straight through the time in between.  I’ll include things like people’s full names and ages at the beginning of each book, their favorite colors, foods, songs, tattoos and piercings, likes and dislikes, family history and generally what will happen in each book.  I also include pictures of what I think the characters look like so that any time I describe them I can refer back to it and describe them in a consistent way.

While I was in the process of creating the document for Hot Rods, I stumbled upon the picture on top of the King Cobra cover on Facebook.  Somehow I tracked down the photographer.  Her name is Sophia Renee and her work is gorgeous.  Even crazier… she didn’t run away when I emailed her and explained who I am and what I do.  Not even when she admitted that the man I’d begun thinking of Eli is actually her boyfriend!  Lucky her 🙂  Through visiting her site I found plenty more inspiration.

Somehow, my editor didn’t kill me when I submitted a twenty-one page cover request for this book.  But really it was the series bible with all the info we needed to make the covers (and books) for the whole series.  Better yet, she was open to asking the art department to consider Sophia’s work.  I want to thank everyone involved in this process.  Samhain Publishing for going the extra mile when it was a lot more work for them, Angela Waters–my amazing cover artist who has brought both Powertools and Mistress’s Master to life along with her work now on Hot Rods, my editor, Amy Sherwood and of course Sophia and her band of hot models.

For fun… here are the rest of the Hot Rods, who you will see featured on the rest of the book covers.  The book titles give you a clue as to what car each character drives.  For example, Eli drives a Shelby Cobra.  If you notice, Angela and Sophia were even able to collaborate to include the same models in the garage scene below!  It’s going to be an amazing two years.  Buckle Up!

Eli (King Cobra)
Alanso drives a motorcycle, a main character in both King Cobra and Mustang Sally
Salome (Mustang Sally) – second down in the strip of photos
Kaige (Super Nova)
Bryce (Rebel on the Run) – top photo
Holden (Swinger Style) – fourth picture down of him in the car
Carver half of the couple featured in Barracuda’s Heart
Roman (Barracuda’s Heart) – second from bottom image will  Roman & Carver

So there you have it.  I hope you enjoy the gorgeous cover my dream team artists have collaborated to create.  And hope my stories live up to their images!  🙂