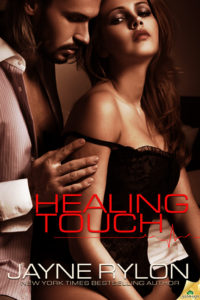 Today’s the day!  Five long years after the first book I wrote (Dream Machine), its sequel Healing Touch is available!  Sorry for the wait, I was kind of busy in between 🙂  It’s kind of neat actually… Dream Machine was my first book and Healing Touch is my 25th (not counting anthologies and rereleases).  I promise not to keep you waiting 25 more for the third book I’m kicking around in my head.  I think Becca’s sister, Elsa, might also need a story.  With that said, the books are independent.  You don’t have to have read Dream Machine to enjoy Healing Touch but the main hero/heroine from the first book play a big part so you might enjoy it more reading in order.  Fair warning!

Another fun fact, for Men in Blue fans… you might notice some cameo appearances by Mason, Tyler, Razor, JRad, Matt and Clint!

A little about the book is below.  And I’m off back to work… there’s lots of great stuff ahead in 2013 starting with Compass Girls in February and the start of the Powertools spin-off series, Hot Rods in April.  The first two books are written and handed in and I can’t wait to introduce the mechanics to you all!  Plus…stay tuned for some AMAZING cover art courtesy of artist Angela Waters using photography from Sophia Renee of Unique Portrait Services.  I’m SOOO excited!

Plus I’m working on a Top Secret project.  More to come within the next few weeks on that. 🙂

Love can be a lifeline.

As thrilled as Luke Malone is for his best friends, Kurt and Becca, enough is enough. The couple welcomed him into their lives, and their bed. But lately, he’s feeling less like a participant in their happiness…and more like an intruder.

Yet when a beautiful woman comes to his sexual psychology practice, Luke is forced to turn her away. It’s not that he doesn’t want to help her, it’s that he wants her. Too much to stay impartial.

Brielle Norris would rather have a root canal than see a shrink. But she’s had enough of letting the scars from an abusive relationship rule her life. Knees knocking, she steps into the psychologist’s office—and runs right into a tall, handsome man whose gilded perfection makes her own quirky faults even more painfully obvious.

She never expected he’d hand her off to one of his colleagues—then take a personal support role in the unconventional treatment she needs to heal.

In tandem with Kurt and Becca, Luke strives to teach Brielle that not all relationships end in disaster. At least this one won’t—if he can keep her safe when her past rears its ugly head.

Crossing the last thing off his list, Luke wandered toward the checkout lines. Only two were open. Of course, he slid behind the skittish woman, who had her eyes glued to the green numbers flashing prices as the cashier rang her up.

Her slender shoulders tensed when he encroached on her territory. So he pretended to read trashy stories from tabloids housed at the back of the queue space. Not that he gave a shit about Tom Cruise’s supposed two-headed alien baby.

She relaxed visibly when he shuffled far enough away to guarantee her unhindered exit route. Out of the corner of his eye, he watched her take a few bills from her wallet, along with an impressive bunch of coupons and a loyalty savings card.

“Would you like to add five dollars for the Elembreth Women’s Shelter?” the cashier asked by rote.

“What will the total be with the donation?” The woman riffled through her purse for another single and some change.

She paused, eyeing her purchases. A small sigh passed her lips as she plucked a bag of mini candy bars from the assortment, leaving only essentials behind. “Would you mind restocking these for me?”

“No problem. Not many people say yes. But I’ve heard that place is good. The owner here…she says she owes them everything.”

“I believe it.” The woman glanced over at Luke as if afraid he might be annoyed by her brief delay. “How about now?”

His heart melted when she handed over all her cash to cover the bill, getting only a few coins in return.

Wanting to say something, he couldn’t find the words.

A part of him roared for him to reach out. To stop her from leaving. Ask her on a date, though he could tell she wasn’t really available, regardless of whatever her relationship status might be.

She packed and collected her reusable canvas totes then left the store, with him still staring after her. When she stopped on the corner outside, waiting for the light to change, the cashier cleared her throat.

“Plastic bags okay for you, sir?”

“Yeah, that’s fine.” He acted before he could think better of it, snatching the candy off the shelf and passing it over the scanner, which beeped brightly as it registered the bar code on the treat. “Go ahead and ring up the rest of this stuff. I’ll be right back.”

Luke dashed out the door.

The zucchini expert, on constant alert, must have sensed him nearing. She flinched at his hasty approach.

He stopped short, closing the gap one step at a time, the bag of chocolate replacing boring zucchini in his outstretched hand.

“For your help.” He willed her to take it.

She bit her lip, hesitated, then shrugged a loop of material off her shoulder, opening one of her bags.

After tucking the candy inside, Luke backpedaled slowly. He didn’t take his warm gaze from hers. “Thanks.”

That dazzling smile made a reappearance a moment before the light changed and she trotted across the street as if her burdens weighed nothing. Three or four times, she whipped her stare over her shoulder as if verifying he didn’t intend to tail her.

He wondered if she shopped at VegVana often as he resumed his place in line, ignoring the dirty look from the guy behind him. He could learn to love this food group if necessary.

“That was really sweet.” The cashier fluttered her lashes at him. All he saw was the memory of soft brown eyes and a riot of long, wavy hair.

“Damn. Two nice people in a row. That’s gotta be a record.” The woman pouted when he didn’t respond to her flirtations. “Have a nice day.”

He slotted his purchases into the saddlebags of his motorcycle, whistling.

It’d been a long damn time since he’d felt like this. A bag of candy was a small price to pay for hope.

Maybe cooking would become his new favorite pastime after all.