Hola!  Today is the release day for Nailed to the Wall, Powertools Book #5.  Pay close attention because you’ll hear about some new characters that just might be getting a series of their own.  More to come on that later…  For today, I decided we should celebrate with a contest.  The Crew is helping to upgrade my kitchen and build me an office right now (they say writing in my bed or on my deck is not ergonomic, ha!).  So… it got me thinking… post a link to a picture of your “dream room” in the comment box below.  It doesn’t matter what kind of space–bedroom, kitchen, outdoor space, or whatever you like.  Whichever three the crew likes best will win each of you a Powertools t-shirt!

In the meantime, here’s a little bit more about today’s release: 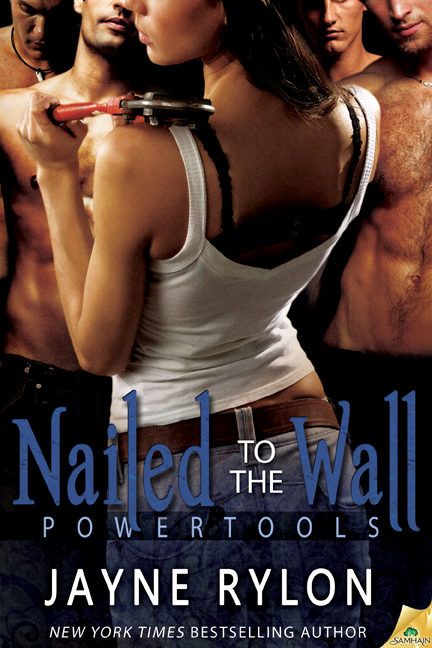 The crew is back and they’re dirtier than ever.

Five sexy men with a penchant for love and lust in any variation have formed a crew. They work hard and play harder—together. Though their partnership began in construction, renovating houses and selling them for a mint, they’ve formed a bond around their shared goal to provide women, and each other, with the ultimate sexual experience.

Over the past year, as each member discovered his soul mate—or two—they expanded the reach of their circle, lighting up their nights along with their souls. Monogamous relationships and the desire to start families threaten to put their libertine revelry on the back burner. Will the passion that bonded them fade away? How will the crew’s new wives cope with the complex relationship the men will always cherish and crave?

Warning: By Book Five in this series, fans will attest that anything goes in the crew. Be prepared for ménage in every flavor–m/f, f/f, m/f/m, f/m/f, m/m/f and more–along with a slew of that’s what he said jokes. No throwing tomatoes at the author, please!