Hey everyone.  I’ve turned my blog over to the infamous Mari Carr today.  If you don’t already know, I’m allergic to alcohol so… I’ll just be passed out under the table after one thimble’s worth of Patron (just ask Mari she’s done it to me before!!!).  Have fun with your guest host and behave!

Welcome to the fifth stop in the Cocktales Pub Crawl. I want to thank Jayne for opening her blog doors to us. Jayne has an amazing series at Samhain called Powertools. If you haven’t checked them out yet, whoooo boy, you do not know what you’re missing! In honor of Jayne’s stop on the crawl, today’s drink is inspired by her sexy crew.

The fifth round is a Powerdrill. Jayne is deathly allergic to alcohol, so NONE for her I’m afraid! Remember to write down that drink title to be entered in the grand prize drawing. Details about the crawl can be found on my website (www.maricarr.com).

This week’s pub crawl is being held to celebrate the release of Screwdriver next Tuesday, March 20. It’s available for preorder at Amazon and Barnes and Noble. The Cocktales books are about four friends who own a combination bar/bookstore in Portland called Books and Brew (this is my DREAM business). Each woman runs a different aspect of the business—bartender, bookkeeper/office manager, the marketing/events coordinator, and the bookstore gal.

How about an excerpt from the story? 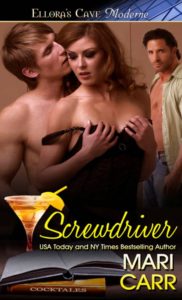 Casey looked closer at the AC unit. “Damn. I was afraid of that.”

“I was hoping it was an issue with the belt, but the motor bearings are shot. I’m going to need to order a part.”

“So it’s not getting fixed today?”

“I’ll see if I can rig a work around for the time being.” He stood and stretched. “God bless it, Jordan. I apologize if this offends you, but it’s hot as hell in here.” Reaching for the hem of his t-shirt, he whipped the thin cotton over his head and fanned himself with it.

Her now-familiar blush returned and Casey felt compelled to prod, to see if his suspicions about Jordan’s underlying naughty side were true. “Just so you know, I absolutely will not be upset if you decide to follow suit and work shirtless for the rest of the afternoon.”

The twinkle in her eyes let him know she enjoyed his joke. “I’m fine with my shirt on.”

“You sure?” he teased, taking a step closer. “I don’t mind helping you peel it off.” He reached out but she darted away, her smile widening.

“Casey,” she said, swatting his hands away. She dodged behind the AC unit and he followed.

The two of them played a quick game of cat and mouse as Casey chased her around the storage closet.

He’d just captured her, Jordan squealing loudly, when the door to the closet opened.

“Jordan? Are you okay?” a deep voice asked from the hallway.

Gabriel peered around the door and Casey wondered what his best friend thought he was seeing. They certainly presented a risqué picture—Casey shirtless, his arms wrapped around Jordan from behind while she laughed.

“Hey, Gabe.” Casey released Jordan and pulled his shirt back on. “What are you doing here?”

Gabriel’s response was slow in coming as his gaze traveled from Casey to Jordan. “I was checking on your progress.” Gabriel’s eyes landed back on Casey’s face and they narrowed angrily. “Looks like you’re making some.”

Shit. Casey’s suspicions about Gabe’s feelings for Jordan were confirmed in an instant. His friend was hot for the accountant.

“We were taking a break,” he explained.

Gabriel looked at Jordan, his expression softening. “You’re blood-red, Jordan. You need to get out of this heat.”

Casey glanced at her face. Gabriel made the same mistake he had. Jordan wasn’t hot. She was blushing. Big time.

“I’m okay, Gabe. No worries,” she answered. “I can see why you two are friends. Casey’s cure for the heat wave is going topless too.”

Gabriel’s expression darkened even further as he snapped his gaze to Casey once more. “Topless?”

“Actually, I think we’re done for the day,” Casey said, anxious to change the subject before Gabriel pulverized him. “I need to order a part before I can fix the unit.”

Jordan frowned and he sensed she was surprised by his sudden retreat to safer territory. Gabriel had never referred to Jordan as anything more than a pal, but Casey could read between the lines—even if his oblivious friend couldn’t.

“Um, yeah. That’s right. We were just wrapping things up. It was nice of you to come by and check on us.” Jordan’s gaze drifted to Gabriel’s face and she smiled.

Crap. The pure longing on Jordan’s face told Casey all he needed to know in regards to her feelings for Gabriel. It told him more than he wanted to know.

Jordan’s cell phone rang. She looked at the caller ID. “It’s Steph. We made plans to do a late lunch. I should take this.”

She walked toward the door as she answered the phone. Gabriel stepped aside and let her escape. Casey suspected he wouldn’t be freed as easily.

“What the fuck were you doing?” Gabe’s question was murmured, but even in the quiet tone, Casey detected the anger. A small part of him was thrilled to hear any emotion at all from his friend.

“With your clothes off?”

Casey shot him a dirty look. “I took off my shirt to cool down. I’ve been in this godforsaken sweatbox for nearly two hours. Besides, what the hell are you so pissed off about? I’m here because you asked me to fix the air conditioner.”

“Why was Jordan in here?”

And now they were getting to the heart of the matter. “I asked her to help me.”

“Since when do you need an assistant?”

Casey was hot and tired and annoyed. Not a good combination. Gabe was poking the bear. “I spotted a gorgeous woman and an empty closet. Come on, Gabe. You’re a smart guy with a degree in finance. Put two and two together. I’m not averse to mixing work and play.”

Gabriel shook his head. “You’re not playing with Jordan.”

His friend’s vehemence tweaked Casey’s temper. “Last time I checked, you weren’t my keeper. Or Jordan’s.”

Gabriel rubbed his neck wearily, and for the first time, Casey noticed the dark circles under his friend’s eyes.

When he spoke again, Gabriel’s voice was calmer. “I’m sorry. I didn’t mean to snap at you. I saw you with Jordan and I…shit, I guess I lost it.”

“Why? I’m not an asshole to women. You know that.”

Gabriel shrugged. “I know. She reminds me of Annie in a lot of ways. Somewhere along the line I’ve become a bit protective of her.”

Annie was Gabriel’s only sibling, and no little sister was ever loved more. Casey wasn’t sure how to respond. Gabe’s initial reaction screamed of jealousy, not brotherly instinct. “I can see why. Jordan’s very sweet.”

Gabriel didn’t seem to appreciate his answer. “So sweet you felt compelled to strip off your shirt and corner her in a storage closet?” 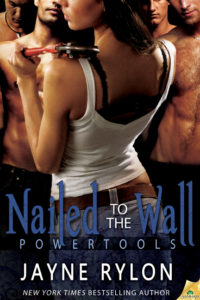 Now how about a little contest? Leave a comment here on Jayne’s blog by 6 a.m. (EST tomorrow, March 17) and one winner will receive their choice of an ebook from Mari’s backlist. The question is a fun one. You’ve hired the Powertools Crew to do a little work around your home. What would they fix and why?

Random aside from Jayne:  Powertools book five, Nailed to the Wall will be out on May 15th!  Woot!  Good luck in Mari’s contest 🙂