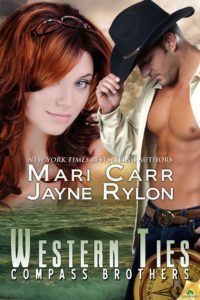 To celebrate the release of Western Ties, I’m holding a Spread The Word contest. It’s quite simple. Mari and I are asking you to help us spread the word about this book. Tweet it, Facebook it, talk about it on a yahoo group, email a friend, tell your neighbor, call your mother, blog about it. Anything! Just…well, anything.

Then…come back here, tell me how you shared the news and your name will go in the hat for a drawing. One winner will receive promo goodies as well as any ebook from my backlist.

And on behalf of Mari and myself, THANK YOU for all the support and well-wishes, lovely emails and posts about this series. Your kindness as we’ve muddled our way through this uncharted path of co-writing has been more appreciated than we could ever say. I’ll announce the winner Sunday evening (Mari is doing a shorter version of this contest ending tomorrow if you’re quick!).

Western Ties is available at Samhain, Amazon, Barnes and Noble, Kobo, Sony and All Romance Ebooks.

How strong are the ties that bind?

Her plan to play anonymously is shot to hell when she runs into high-school crush Sawyer Compton—and he lays immediate claim to her.

Sawyer Compton commands total control, in and out of the bedroom. He never thought Leah could handle his darker urges, but one look at the white bracelet that marks her as a sub ripe for the picking, and he knows exactly how this night is going to end. With Leah in his bed.

Leah didn’t expect to enjoy the comfort Sawyer’s familiarity brings, even as his touch takes her to unimaginable heights of pleasure. When bad news from home sends him reeling, she’s more than prepared to offer him anything he needs: her body, her friendship. Even her heart—if Sawyer can loosen the reins over his own to accept her love.

Invest in tissues. Lots and lots of tissues. Between spicy, set-the-sheets-on-fire bondage romps and the last Compass brother coming home, you’ll need them.

“Leah?” a familiar male voice behind her said.

Leah closed her eyes and prayed she’d imagined it. There was no way. No possible way—

She sighed. Fuck. What were the chances?

Turning, she realized her night wasn’t going to end as she’d planned. She should have saved her money. Should have stayed inComptonPass.She was screwed.

“Sawyer.” She didn’t bother with the pretense of being happy to see him. “What the hell are you doing here?”

Sawyer narrowed his eyes, refusing to answer. His gaze started at the top, taking in her dramatic makeup, before drifting lower to her breasts, accentuated by the tight corset Stacey had loaned her. She willed herself to remain still as he finished his visual tour with a long look at her short leather skirt and stocking-clad legs.

“Enjoying the view?” she taunted. “You still haven’t answered my question. Shouldn’t you be inSan Francisco? What are you doing here?”

A couple of years earlier, Sawyer had helped her organize a field trip to Compass ranch. It had been one of the highlights of the year for her students—and for her. It was also the last time she’d seen Sawyer. Two years was a long time. She certainly hadn’t expected their reunion to take place inL.A.

She sucked in a deep breath and tried to hide her disappointment. He was right. She’d purposely put herself as far away from home as possible, so that she could indulge in these two nights. One weekend to confirm a few suspicions she’d always held in regard to her sexual preferences. Sawyer was going to put a wrench in the works.

She gestured at her outfit. “I would think my role here would be obvious.” For the first time, she allowed her gaze to travel over him as well. Her body heated with arousal as she noted how unbelievably sexy he was. He wore tight dark jeans and a black T-shirt that hugged his muscular chest to perfection. No one in the place would fail to read the dominance in his stance, the aura of power he projected.

On the surface, she was shocked to find her friend in a place like this, but there was another part—deep inside—that wasn’t a bit surprised. He belonged here.

“So you’re a Dom?” She fought the urge to laugh as she asked the absurd question. Of course he was.

His gaze drifted to her arm. He grasped her wrist, pulling it up and toying with the white wristband the host had given her upon arrival.

“You understand what this means, right?” he asked, gesturing to the bracelet.

Sawyer completely ignored her Dom question. It didn’t matter anyway. It had clearly been rhetorical. He was aCompton. Anybody and everybody from their neck of the woods knew that name was synonymous with alpha male.

She gave him an annoyed look. “Of course I do.”

It was evident from his tone he didn’t think she belonged here any more than Stacey. One of the reasons she’d planned this adventure far away from home, surrounded by strangers who didn’t know her, was because rumors spread like wildfire in their small hometown. She knew about Sawyer’s sexual proclivities, and she’d always wondered if she shared a few of them.

Besides, her sweet disposition didn’t inspire the more adventurous cowboys back home to ask her out, so her opportunities for exploration were seriously limited. Julie was right. She was a goody-goody.

Sawyer didn’t appear to like her answer, so he restated the obvious. “It means you are an unattached submissive who’s looking for a Dom. This wristband has declared it open season on you.”

She shrugged, unconcerned. “Sorry to shatter the illusion, Sawyer, but I think I can handle whatever this party dishes out. It’s not like I’m a virgin.”

He frowned. “You lost your virginity in the backseat of a Pontiac to Les Prescott after Compton Pass won the district football championship our senior year. The guy was a shithead. You should’ve chosen better.”

Leah laughed, though a ripple of desire slammed into her. It was always this way with Sawyer. Though they were just friends, there’d never been a time when she hadn’t felt his gaze on her. He’d scared off more than a few would-be boyfriends in her lifetime claiming they were only after one thing. Les had fallen into that category, but Sawyer had been playing on that championship team and had been a bit distracted that night.

Sawyer had appointed himself her personal guardian in third grade when Jordan Haskiell had shoved her down on the playground after she’d beat him in a footrace. As a result, Sawyer had endured an afternoon in the principal’s office and God only knew what kind of punishment at home after issuingJordana very physical, very painful warning of what happened to guys who messed with Leah. While Sawyer hadn’t pursued her romantically, he’d certainly taken the bonds of friendship to a new extreme.

Despite the fact they’d existed in different cliques at school, Sawyer hadn’t let social status stop him from being one of her best friends. He’d run with the jocks and cheerleaders, while she’d been firmly encamped with the brainiacs, less affectionately referred to as nerds by their peers. “How could you have known about Les?”

“I told you. He was a prick. He was bragging about it at school the following Monday.”

She flushed. She’d never heard of Les spreading rumors about her. “I didn’t know—”

Sawyer grinned. “Luckily, he started his boasting with me. I took him out behind the school and gave him a reason to shut his fucking mouth.”

His admission held a hint of humor, but she could tell he was angry. She decided to test the waters to see how screwed she was.

“Well, it was great to see you again, but Stacey and I were going to pop over to the bar for a drink.”

“I’ll go with you.” He confirmed her fear.

She smiled and shook her head. “No, I don’t think that’s a good idea. You’re scaring off all the other Doms.”

His wolfish grin let her know that was his intent.

Stacey lightly touched her arm, alerting Leah that she’d spoken too loudly. Several people glanced in her direction and frowned. She was never going to achieve her goal at this rate.

Sawyer was the only person in the room who didn’t take offense at her faux pas. “You realize this is a weekend party?”

She nodded. It was starting to look like it would be a long two days.

Sawyer reclaimed her hand, slipping off the white bracelet.

“What the hell are you doing?” She tried to pull her arm free, attempting to grab the wristband back.

Sawyer’s grip was implacable. He reached into his pocket and pulled out a green bracelet. Suddenly, she felt dizzy. There was no way he would—

Sawyer slipped it around her wrist.

“No,” she whispered when he lifted her hand.