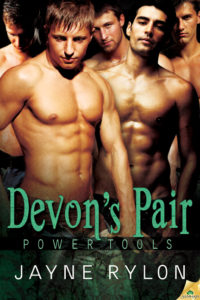 That’s right, the crew is back and better than ever (at least I think so).  Then again, Neil and James have been my favorite characters to write in this series… until Devon came along.  In all of the Powertools books the stories are told from the female point of view.  Because for me, if this was going to work it had to be about how sharing the guys made the women feel I suppose. Devon appeared on the scene and replaced Neil and James as my fav (only by a little guys, don’t worry).  As I sit here on the eve of the release of this book I’m wrapping up writing book five, Nailed to the Wall, and I can promise you’ll be seeing a lot more from Devon’s point of view in this one too!

But anyhoo… as for Devon’s Pair, it’s out today!  YEY!  Here’s a little more about the book including an early review from Guilty Pleasures.  I hope you enjoy reading the latest installment in the Powertools series as much as I did writing it.

James has watched each of the crew fall in love, one by one, until only he and his life partner Neil remain “unattached”.  So, when he sees the way his bisexual boyfriend is checking out their new apprentice, he’s sure he’s doomed to lose the man of his dreams.  His love is strong enough that he would let go to ensure Neil’s happiness.  Instead, sparks fly between the three of them and he realizes he might not have to surrender because his boyfriend’s girlfriend is becoming his girlfriend, too.

Don’t Take My Word For It (Click on the link for full review!)

5 Stars from Didi at Guilty Pleasure Reviews, “HOLY SMOKIN’ MENAGE!!!! It always amazes me how even when Jayne Rylon is pushing my “comfort zone” with one of her smokin’ hot sex scenes, she never fails in getting me all hot & bothered and making it where I can’t put the book down.  This is a short story, but length does not take away from the smokin’ hot sex and the emotional turmoil between Neil, James and Devon. IMO this is one of the most emotionally beautiful stories of the series, the connection between Neil, James and Devon is soo strong it’s believable, as are the feelings of despair and jealousy that come up.  And that naughty, evil Jayne…left us with a hell of an ending!! Thankfully it’s not the end of the series, like I thought. I strongly recommend reading Power Tools in order to be able to get the whole dynamic of this group of friends/lovers, they are all novellas. WARNING: You need to be open to menages in any number of variations