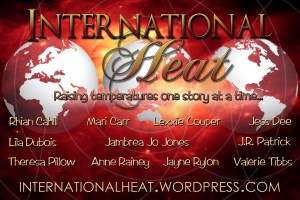 For this week we have a special treat!  It’s Theresa Pillow, better known as T! from Ebook Addict Reviews. I first met T! on the Samhain Reader Cafe where she was always quick with encouragement and one of the few people still awake and on the loop when I’m writing late at night after the day job.  She writes fantastic reviews on her site like this one:

“Fascinating world building is only the beginning when it comes to Jessica Freely’s Amaranth & Ash. I was totally blown away; I really have no other means to describe how utterly compelling and enthralling this story is. And it definitely left me wanting much, much more.

At first I was merely intrigued by the vasai and their male and female characteristics, but Jessica Freely did such an amazing job of making the vasai unusual, yes, but also real that I could envision them. And for people so beyond my ken that’s a pretty neat trick!

The characters, especially Ash and Amaranth, stole my heart; even more they co-opted my imagination and took me on their voyage of discovery and journey to love.

Ash is, supposedly, the lowest of the low; the chel are treated as though they’re good only for doing jobs no-one else wants and are practically soulless beasts. But Ash has never felt as though he fit in and was constantly searching for more… but more of what he never knew. Until, that is, he met and got to know Amaranth.

Amaranth is, seemingly, a class of people with everything good, but he does not feel this. He’s sure that there’s a lot more out there and he’s finding that doing his job is becoming more and more of a chore. He’s unsure of what it is he’s feeling, but he’s pretty sure he’ll know when he finds it. He’s right… and Ash is the key.

Two people who do not fit in their ‘categories’ and who feel that there is more of something out there, Ash and Amaranth are perfect for each other. Even with the horrendous attack on him, Ash has found what he’s been looking for. I truly loved watching as these two exceptional people discovered not only love, but something even greater.

This is a thrilling adventure, but also a beautiful and extremely fulfilling romance, on more than one level. It has the hallmarks of a saga in the scope of character and plot and yet is only 150 pages. Wow!

Jessica Freely has my full attention and you can bet that I’ve just begun my acquaintance with her vivid and memorable storytelling.

So be sure to stop by International Heat this week and check out T!’s week to host the fun.  She’ll also be giving away a bag of goodies from Bath and Body Works.  Hope you’re enjoying the summer and the Meet the Heat marathon.