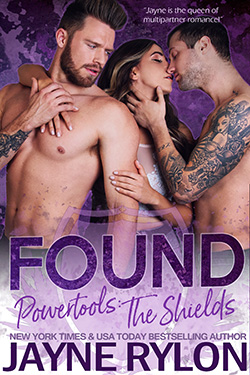 The Shields security team accepts missions in the grey area of both law and morality that no one else wants or can handle. They’re a ragtag bunch of special ops soldiers, ex-government agents, and hackers wrangled by a former construction worker who aspired to be a superhero’s sidekick when he grew up.

What could go wrong when they turn their sights on a human trafficking ring that might have been the reason their coordinator’s sister disappeared nearly thirty years ago?

Nolan Skalbeck is sure their assignment is a bad bet. Regardless of whether or not they find the hauntingly gorgeous woman their artist sketched or not, the horrific things he discovers about the operation they’ve infiltrated convinces him they have to shut it down for good by whatever means necessary.

What he doesn’t expect is to fall for a woman who already has a partner, and is willing to share him with Nolan. Once he has, it will take every bit of his strength and training to keep from losing them both.

Even if he’s successful, how will he convince them, himself included, that he’s not a horrible person—like the ones they’ve been surrounded by for most of their lives—even though he hunts and destroys evil bastards for a living? 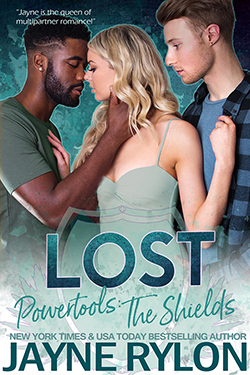 A medic who’s used to treating bullet wounds discovers an undercover agent, or two, who want to heal her heart.

As a medic for a team of do-gooder assassins, Kennedy usually patches up her partners after they’ve taken out some of humanity’s trash.

This assignment is totally different. She’s required to risk both body and soul to seduce her ex, Knox, and convince him to double-cross the cartel he’s worked for since he left her without a backward glance.

Marcus has been addicted to Kennedy since they became partners at Shields. He can’t turn away, even if it means watching her over their comms with the jerk who broke her heart and made her swear off relationships, including one with him.

When Marcus and Knox form an unlikely alliance, to keep a new superdrug from ruining more lives—like they destroyed Knox’s—Kennedy is forced to make a decision: continue to resist the potent chemistry they have together to protect herself or be brave enough to make up for the time all three of them have lost.

Lost is a multipartner romance in NYT and USA Today bestselling author Jayne Rylon’s fan-favorite Powertools Universe. Visit your favorite characters or meet new ones in this interconnected why choose standalone in the Powertools: The Shields ménage series. 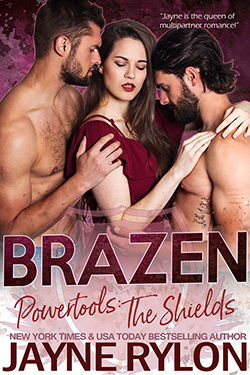 They were sent to kill him, but fell in love with him instead.

Sola doubted her instincts after her best friend and partner on the Shields security team, Aarav, acted for months like the attraction between them didn’t exist. One wild night on their boss’s private jet proves she was spot on even if she has no idea where their relationship will go from there.

When they’re sent to assassinate the head of a money laundering operation at a brand new casino, Sola looks into the eyes of their target and her gut screams he’s not the source of the evil they’re hunting. Risking everything, Sola steps in between the man she loves and the one they’ve been sent to kill.

Sola’s instant and undeniable attraction to their unintended captive forces them to investigate him further and decide—will they eliminate him, protect him, or entice him to join their intimate partnership?

Brazen is a bisexual multipartner romance in NYT and USA Today bestselling author Jayne Rylon’s fan-favorite Powertools Universe. Visit your favorite characters or meet new ones in this interconnected, why choose standalone in the Powertools: The Shields MMF ménage series. 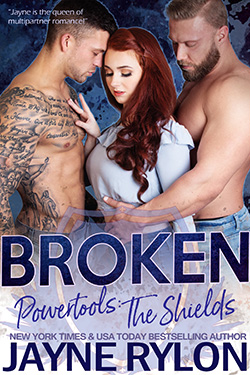 Geeky tech girls aren’t supposed to have this much fun with their super spy co-workers.

Ruby typically supports a team of do-gooder assassins from the safety of her supercomputer in their command center. She’s dragged into danger when hackers attack her, empty millions from her crypto wallet, and threaten the global economy by tampering with blockchain technology.

Worse, her attraction to two of the agents she works with—Ace and Liam—is a distraction none of them can afford, especially when she winds up sharing a bed with them for her own safety.

They’ve got issues of their own. Ace barely returned to active duty after a grievous injury that wrecked his arm and nearly ended his career. His wounds fractured more than bones, shaking Liam’s confidence and willingness to deepen their partnership both on and off duty because they risk their lives daily to protect others. And that’s before they admit that they’re falling for the same nerdy-yet-adorable woman, who should also be strictly off-limits.

Can Ruby fix what’s broken between the three of them before the hackers end her career and her life?

The Shields security team accepts missions in the grey area of both law and morality that no one else wants or can handle. They’re a ragtag bunch of special ops soldiers, ex-government agents, and hackers wrangled by a former construction worker who aspired to be a superhero’s sidekick when he grew up. What could go wrong? 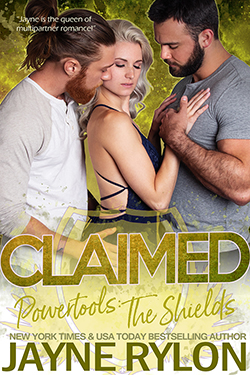 When Karolena answered an ad for a live-in housekeeper responsible for taking care of at least a dozen guys, she was obviously desperate.

Although she hadn’t realized they were spies and assassins when she accepted the position, it could work out for the best since the Shields’ headquarters might be the only place she’s safe from the evil ex hunting her.

That is, if she doesn’t give in to the two agents that live across the hall who tempt her to do things that could be dangerous to her still healing heart.

Tavish is more than willing to show Karolena a good time so long as that’s as far as it goes. He’s learned the very hard way that it’s fine to sleep with women, or men, so long as you don’t trust them.

That’s only because Tavish’s partner—both in the field and the bedroom—has always made sure his judgement isn’t compromised when they surrender to their non-traditional urges together. Legend is the one person Tavish is certain has his back since he’s proved it over and over on life or death missions yet still, he’s not able to give the man the affection he deserves along with plenty of satisfaction.

So when they find themselves entangled with their housekeeper, and her ties to the mafia, they have to decide whether she’s capable of bringing the three of them together permanently or whether they have to get rid of her before she wrecks them for good.

The next bisexual multipartner romance in NYT and USA Today bestselling author Jayne Rylon’s fan-favorite Powertools universe. Visit your favorite characters or meet new ones in this interconnected why choose standalone in the Powertools: The Shields MMF ménage series. 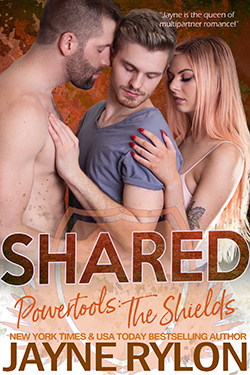 Aven pilots a private jet for a team of do-gooder assassins, but it isn’t until she’s shared by two special spies that she truly learns to fly.

Konstantin is determined to get even with his Russian mafia kingpin ex-boyfriend, Levin. The jerk sidelined him, banishing him to unlikely babysitters for safekeeping—a den of foreign agents trying to take down the entire operation.

What better revenge than to seduce the smoking hot pilot Levin craves and rub it in his face?

Levin doesn’t care if Kon is pissed. At least he’ll live long enough to get over it, free of the life of crime he hadn’t had any choice but to live. Thoughts of what Kon and Aven are getting up to every night rile him, though not in anger.

Rather than fight over which one of them gets to keep her, Levin plans to teach Kon how to share.

As soon as he gives the Shields the evidence they need to crush the organization he’d been born to run. But when things go sideways, Konstantin might be his only chance at surviving long enough to make his boyfriend’s girlfriend his girlfriend too.

The next bisexual multipartner romance in NYT and USA Today bestselling author Jayne Rylon’s fan-favorite Powertools universe. Visit your favorite characters or meet new ones in this interconnected why choose standalone in the completed Powertools: The Shields MMF ménage series.